Like our work? Arrange a meeting with us at our office, We'll be happy to work with you!

We are always looking for new talents and we were expecting you. Time to apply, buddy!

THE TOP 10 NATURAL MONUMENTS IN SARDINIA

THE TOP 10 NATURAL MONUMENTS IN SARDINIA

Are you a nature lover looking for those landmarks that wind, sea, sun, and geological movements have shaped into masterpieces over the last thousand of millennia? Here you will find the Top 10 Natural Monuments in Sardinia that you cannot miss.

#1 IN ITALY FOR NATURAL LANDMARKS

Did you know there are 28 officially recognised Natural Monuments in Sardinia? That makes it the first Region in Italy by the number of natural landmarks. Go and find out if they make it first by their beauty too.

You can reach most Natural Monuments fairly easily by car. However, you’ll have to take the boat or walk along trekking routes to reach others. Usually following applies: the longer the way, the greater the reward.

You will find that most Natural Monument sites can be accessed for free.

In some instances, you may be asked for a nominal fee.

Other times, you’ll be better off by hiring a guide to take you, especially if the path to the landmark takes you through the areas of a National Park.

If you’re unsure, please get in touch with us

If you find yourself leisurely strolling between the marina and the main beach on a hot summer day, you might want to rest for a few minutes in the shadows.

Look for an unpretentiously designed white church. Built in the year 1052 as a thank you to the Virgin Mary by the Princess of Navarra after being spared a catastrophic shipwreck, this church is probably the reason the group of olive trees nearby has survived hundreds of years.

It was, in fact, customary to plant or let grow a few trees next to every church to offer refreshing shadow to pilgrims and visitors.

A TREE OF RECORDS

Did you know the oldest of these Olea Europea L.var.Sylvestris (Miller) Brot is the seventh biggest tree in Italy by circumference? Measuring 8,40 metres, it might be too large for you to hug but you can always try with the other monumental olive, carob and hackberry trees in the park. 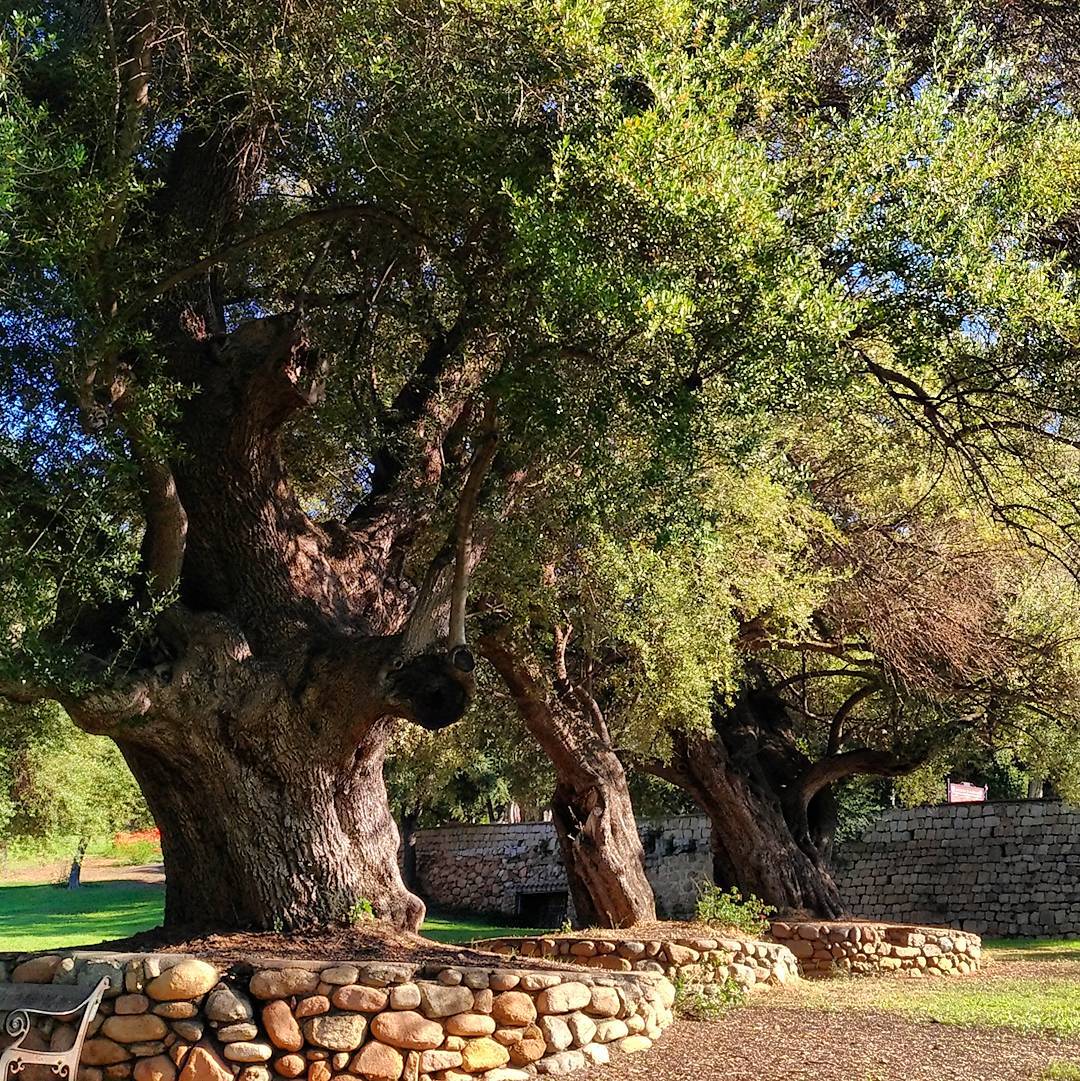 One of the characters that Virgil and Dante meet in Canto XXXIII is Count Ugolino of Gherardesca (1220-1289) while he is intent on biting Archibishop’s Ruggeri of Ubaldini’s skull. The latter was supposedly guilty – together with the families Sismondi, Lanfranchi and Gualandi – of the uprising in Pisa that led to the imprisonment of Count Ugolino and his – and his family’s – death by hunger.

Dante implies in his Divine Comedy that the two sons of Count Ugolino were eaten by their father while in prison.

What has Dante to do with Acquafredda? Well, it so happens that Count Ugolino is the one who ordered the Castle of Acquafredda to be built on top of this hill. His fortune and rise to power in Pisa were financed by the silver mines he owned in this area.

In fact, in the mid Thirteen century, Count Ugolino waged war to the sovereign of Cagliari – who was allied with the rival maritime republic of Genoa – and won.

As a testimony of the long-lasting effect of Gerardesca’s lordship consider that a Book of Rules – a copy is preserved in Iglesias – regulating civic life had been used and sworn by the rulers of this part of Sardinia until at least 1750.

Coming back to the hill, it is in itself geologically interesting. It formed about 30 million years ago when particularly viscose lava erupted and instead of flowing over the plane kept on piling up in a dome shape before solidifying.

A freshwater source springs from the top of the hill, hence the name Aquafredda – cold water in Italian.

Thanks to these particular conditions, nowadays you can walk to the ruins of the castle and the medieval village and forts between bushes of lentiscus, buckthorn, juniper and euphoria arborescent.

Keep your eyes open as many bird specimens call this hill their home. Among them are barn owls, owls, common kestrels, buzzards and some rarer lesser kestrel (Falco Naumanni).

If all that isn’t enough, from the top of the hill you can enjoy a panorama that stretches from the West Coast of Sardinia to the South lagoons in Cagliari. 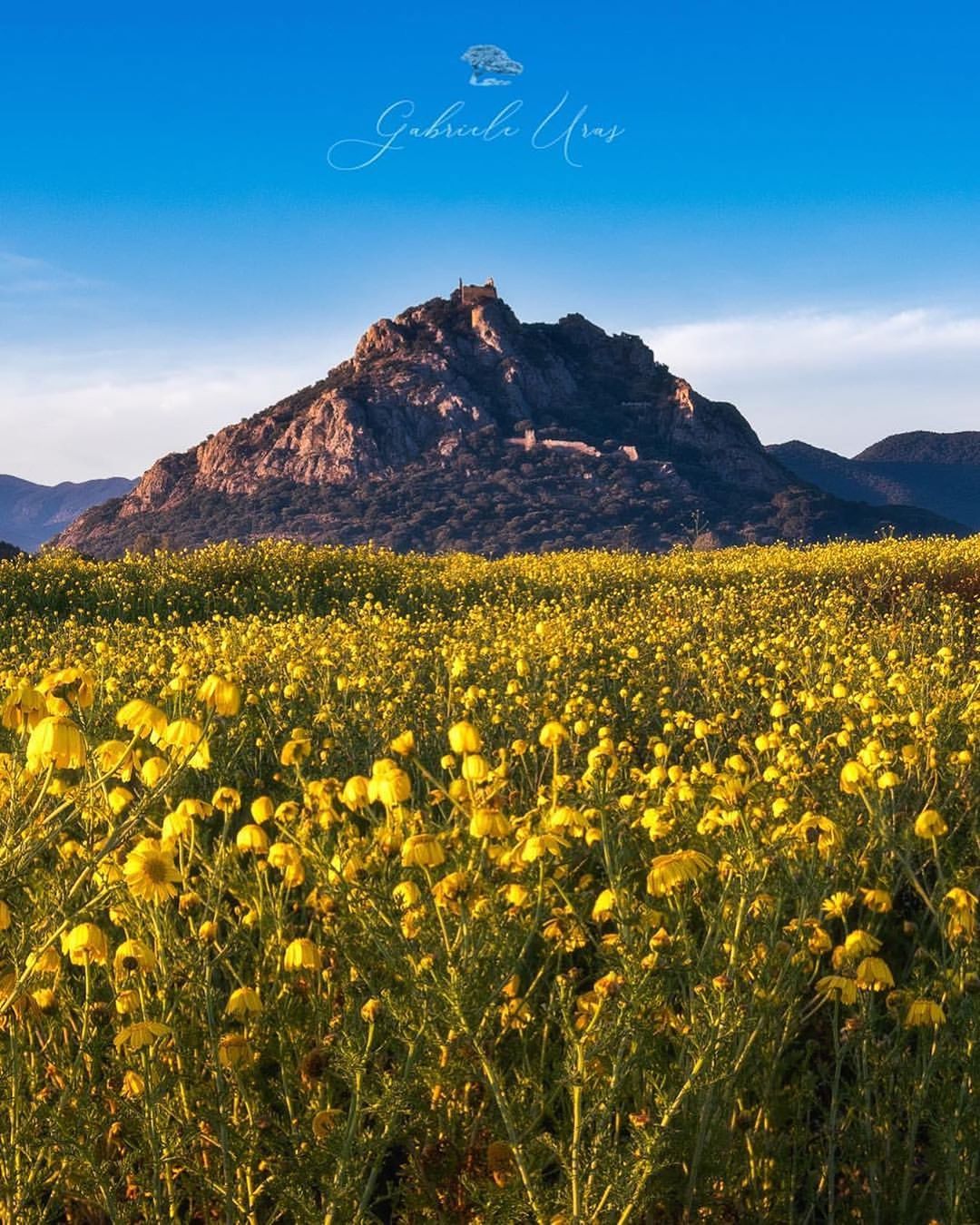 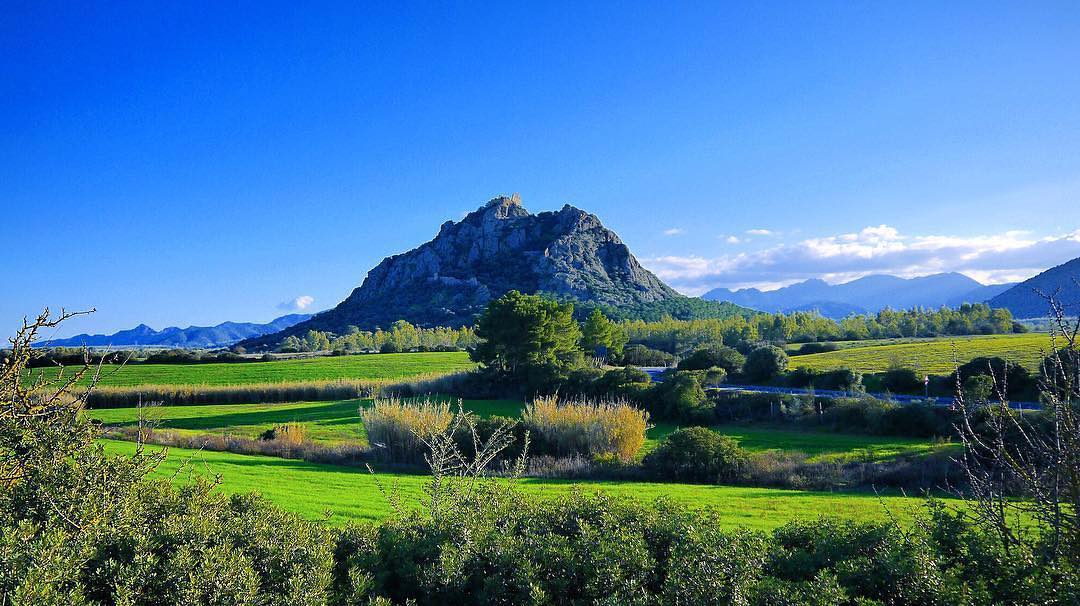 Did you know that this particular Bear-shaped Rock was already well-known in ancient times?

The Romans used to call this place Arcti Promontorium, the Bear Promontory, and the astronomer and mathematician Ptolemy in the II century AD includes this rock in his works.

The legend goes the even Homer knew about it and chose this place as setting for Ulysses and The Land of Laestrygonians.

The Bear Rock also marks the highest promontory overlooking the Islands of the Archipelago of La Maddalena – the short walk up the hill is definitely worth it.

A BIT OF GEOLOGY

For those geology lovers among you, the rock formed between 480 and 280 million years ago and its shape is due to the hydrolysis of silicates in the granite block (typical of warm and humid climates), the exfoliation process following changes in temperature, and the continuous erosion of wind and rain.

Its light orange colour is due to the oxidation of the iron and magnesium minerals characteristic of the granite stones in this area. 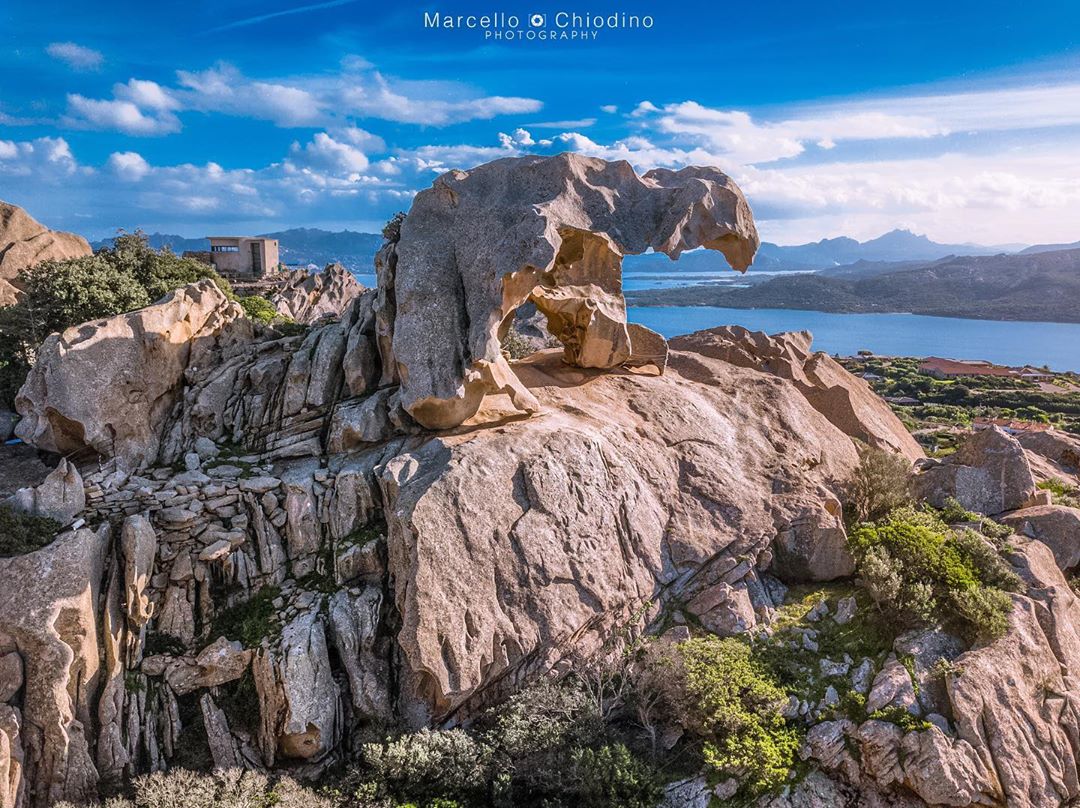 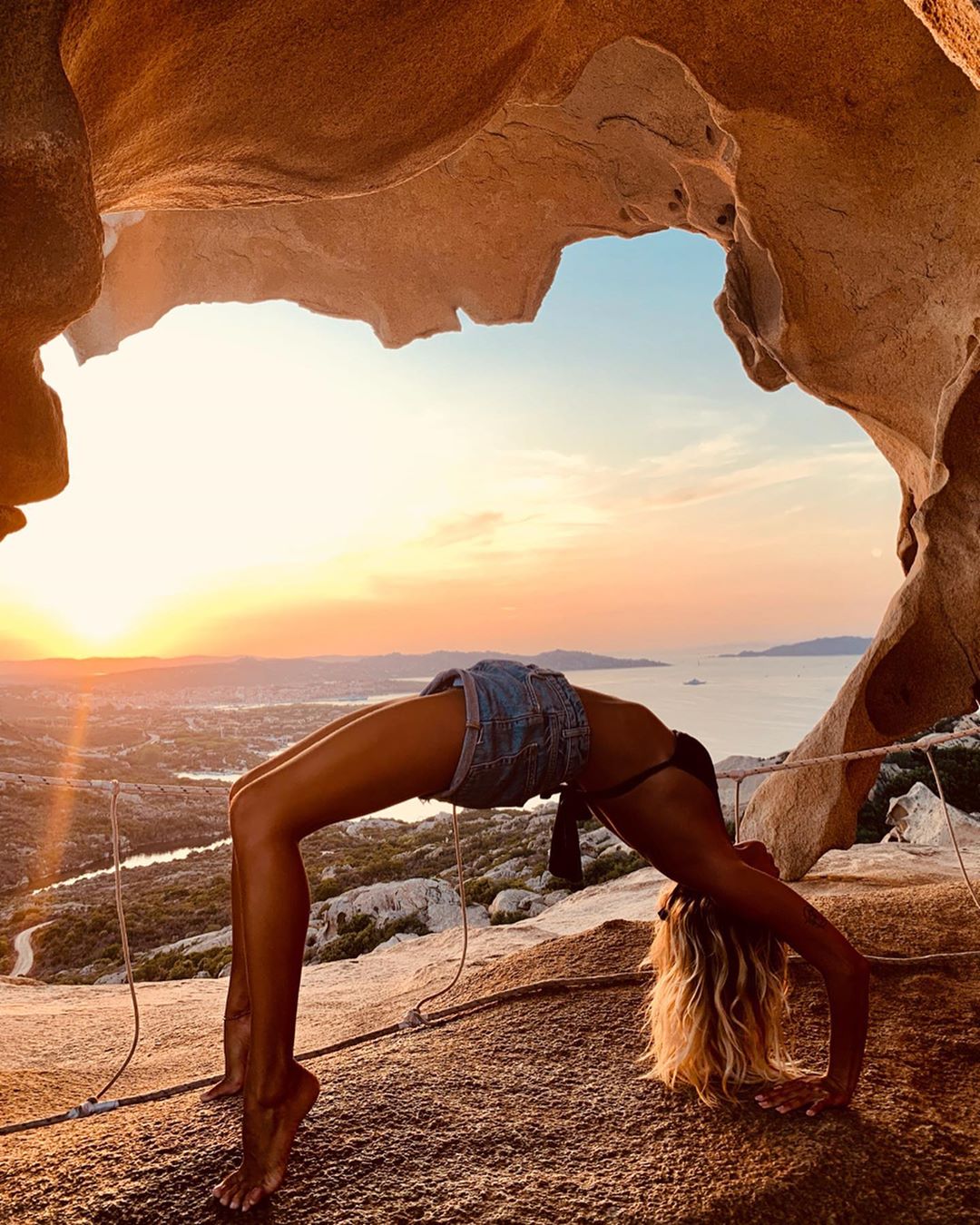 The silhouette of this particular rock formation might recall images of the American Monument Valley. That’s because of the similarities in the erosion process that led huge fragments of mountains to stand alone.

The Jurassic rock – it formed about 200 million years ago – was probably a place of devotion attracting numerous pilgrims in the Nuragic (1800 BC-400 BC) and pre-Nuragic periods.

More recently numerous folk tales identify the rock with one of the entries to hell. During full-moon nights whoever wants to become rich can go to Perda e Liana where devils dance on the top of the rock and around its cone-shaped base and sell their soul.

Visits are recommended in day-time. 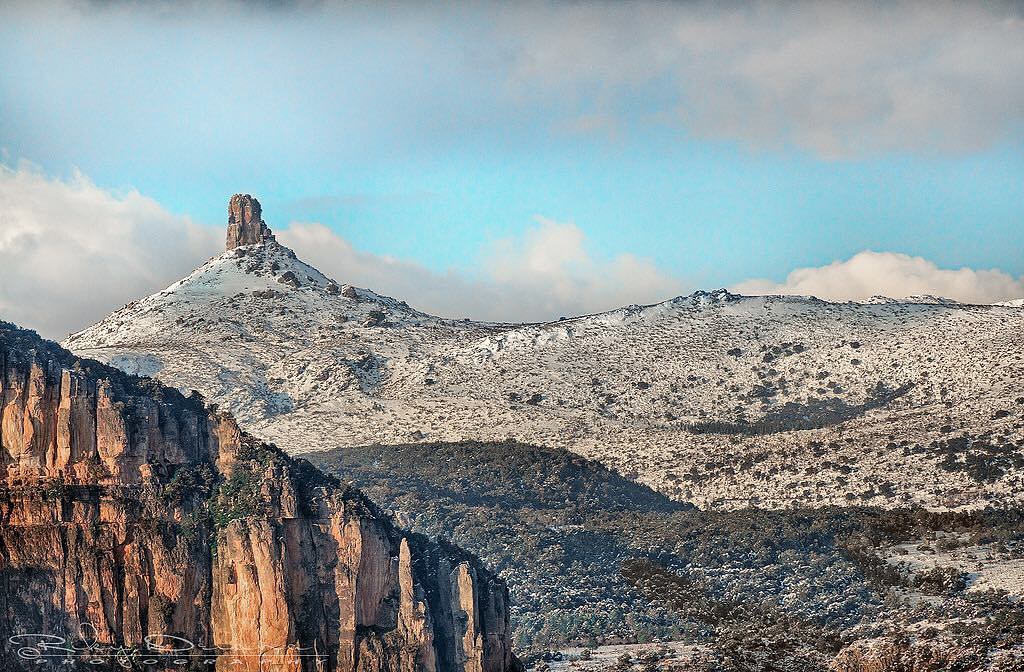 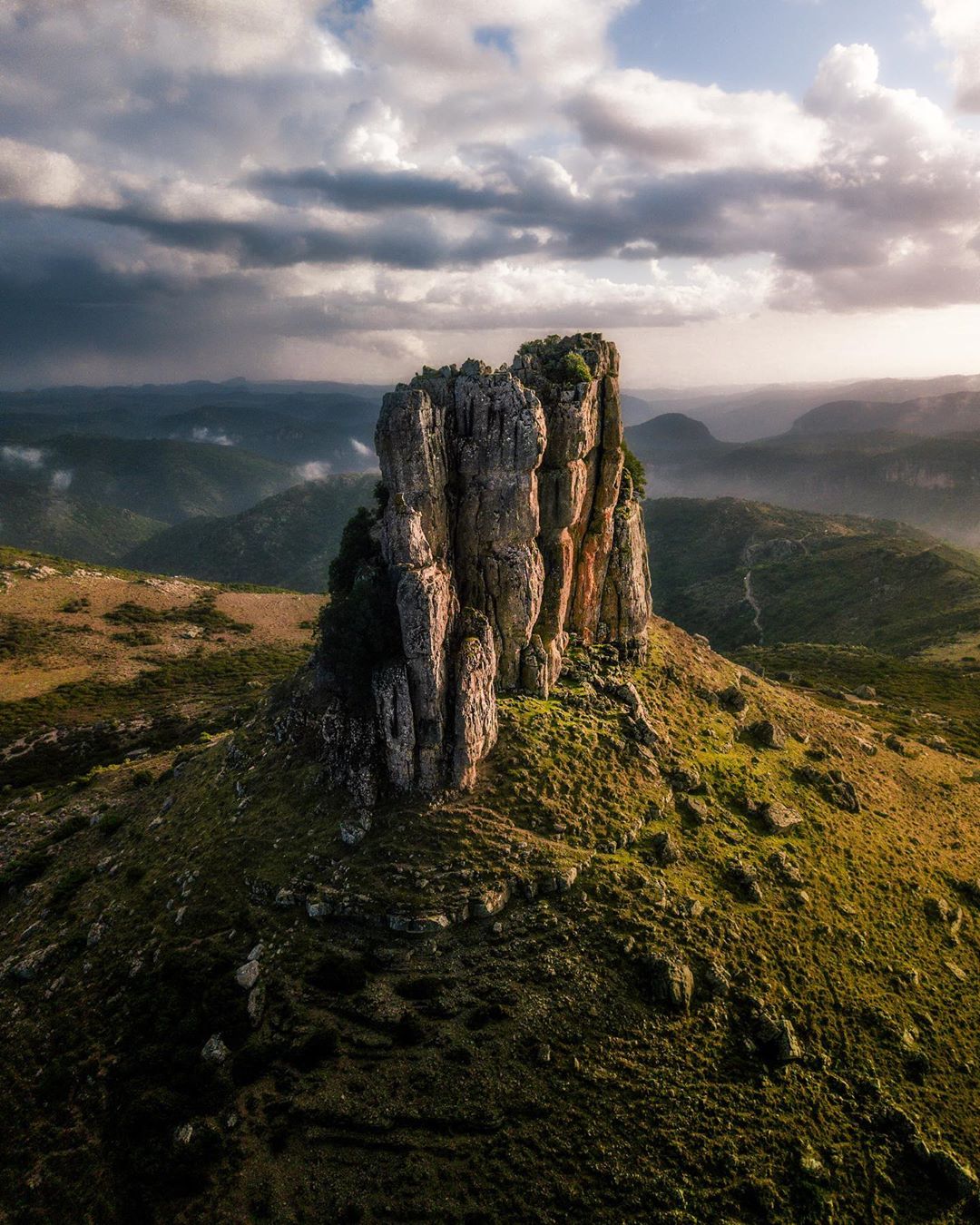 Australia has its Seven Sisters, Sardinia has its Pan di Zucchero (Sugarbread in Italian) and two other smaller rocks. You’ll see them in front of high cliffs when travelling the panoramic road along the coast next to Masua and Nebida.

S’Augusteri and Il Morto (The Dead) are grouped together to the south of their bigger sibling, Pan di Zucchero.

133 meters high, holed by two caves partially extending underwater, it extends for 3,72 hectares. One of these caves is particularly famous as its shape and reflection in the water closely resemble the shape of Sardinia.

All three are limestone rocks of particular purity – they look like made of wax – with colours ranging from white to light blue. Some streaks of yellow are due to natural chemical reactions that occurred millions of years ago.

Don’t worry about getting there at a particular time of the day to catch them at their best – they make photogenic subjects at all times of day for your postcard shots.

Can be reached by boat but are not meant to. You get a wonderful view along the coastal road SP83 from Gonnesa to Masua 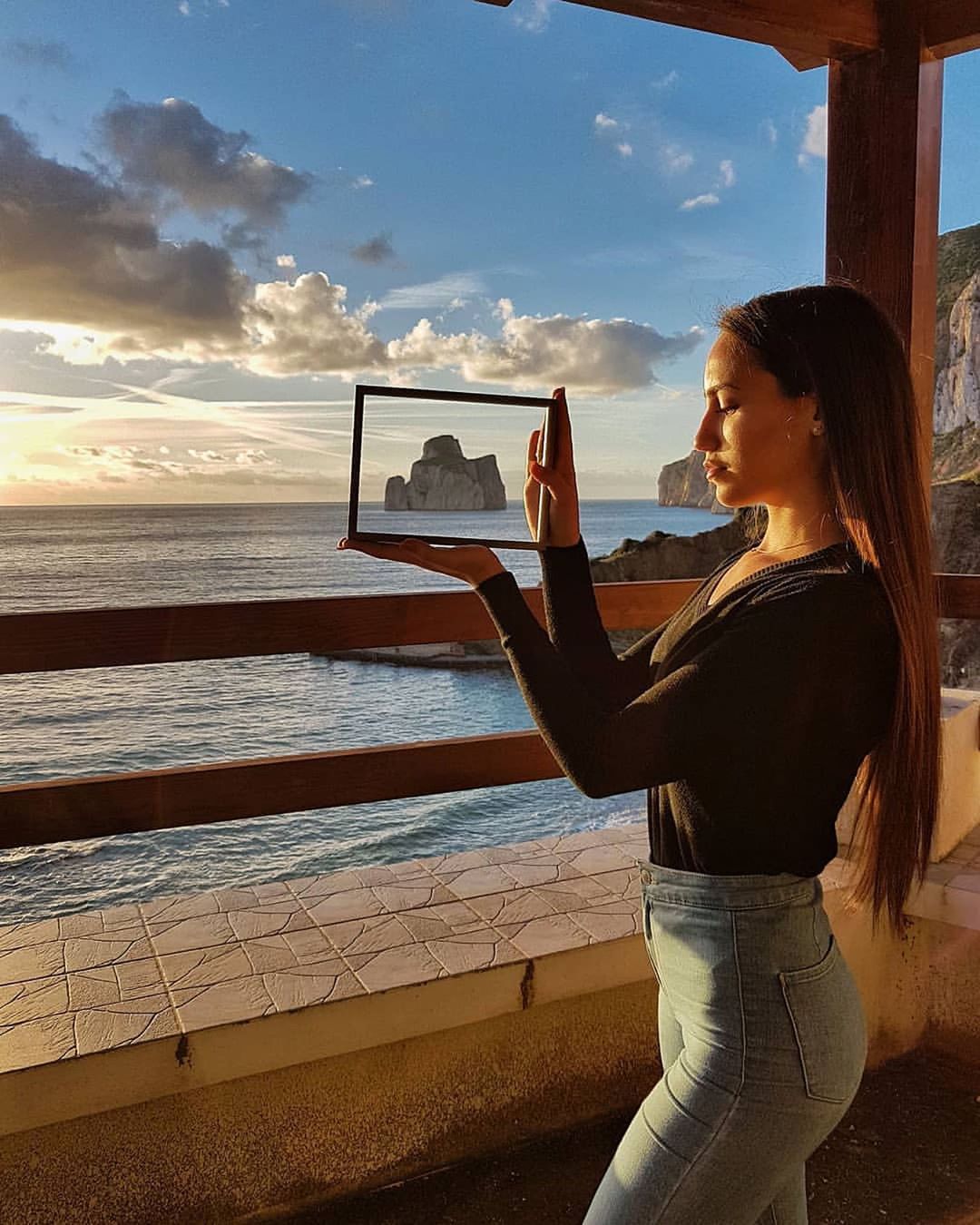 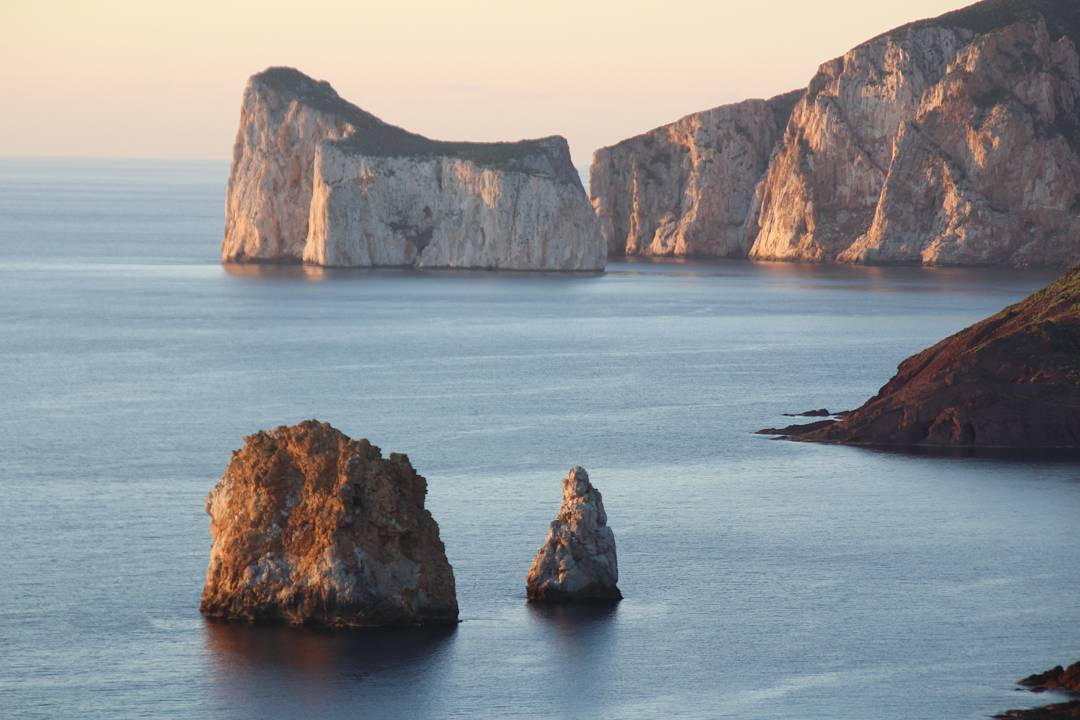 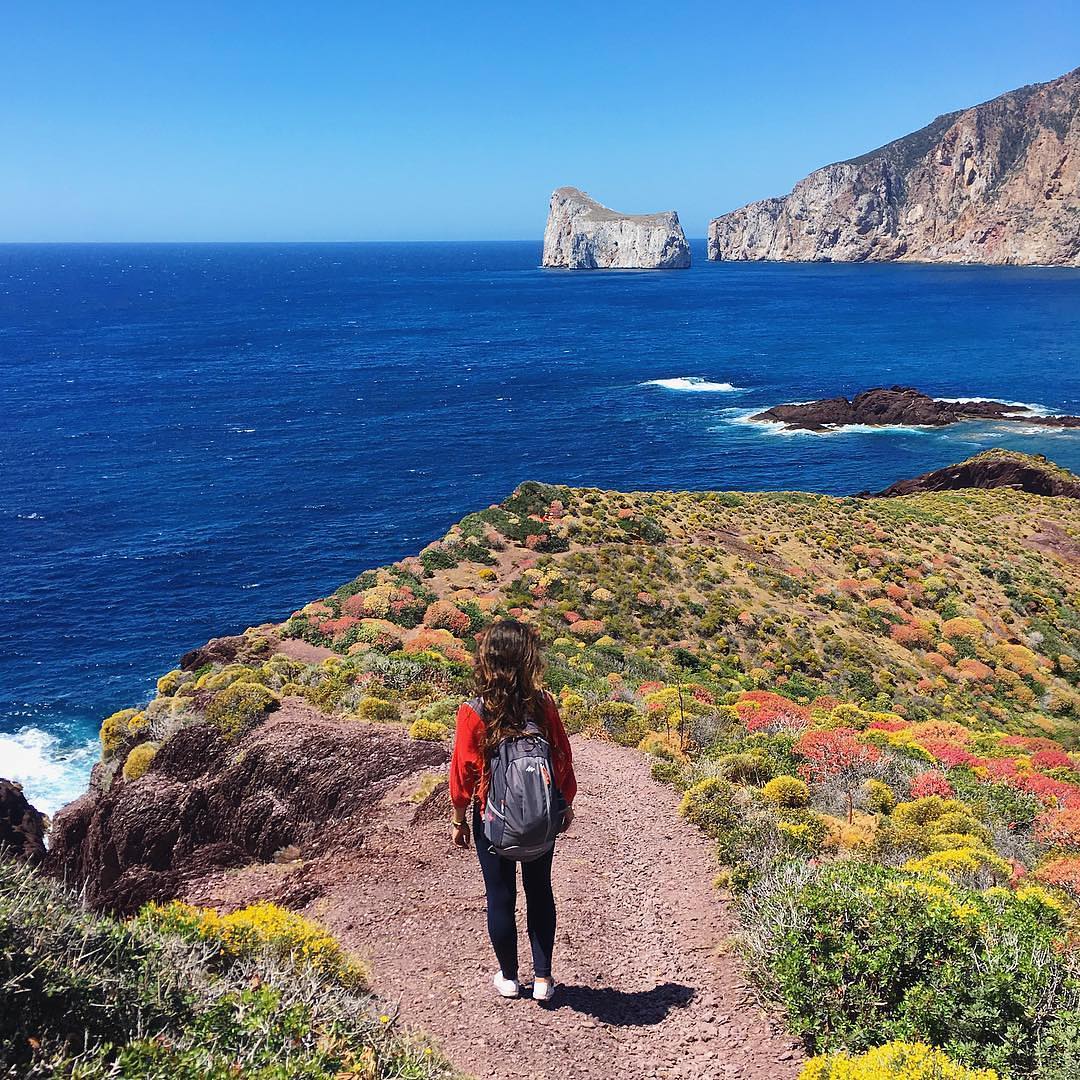 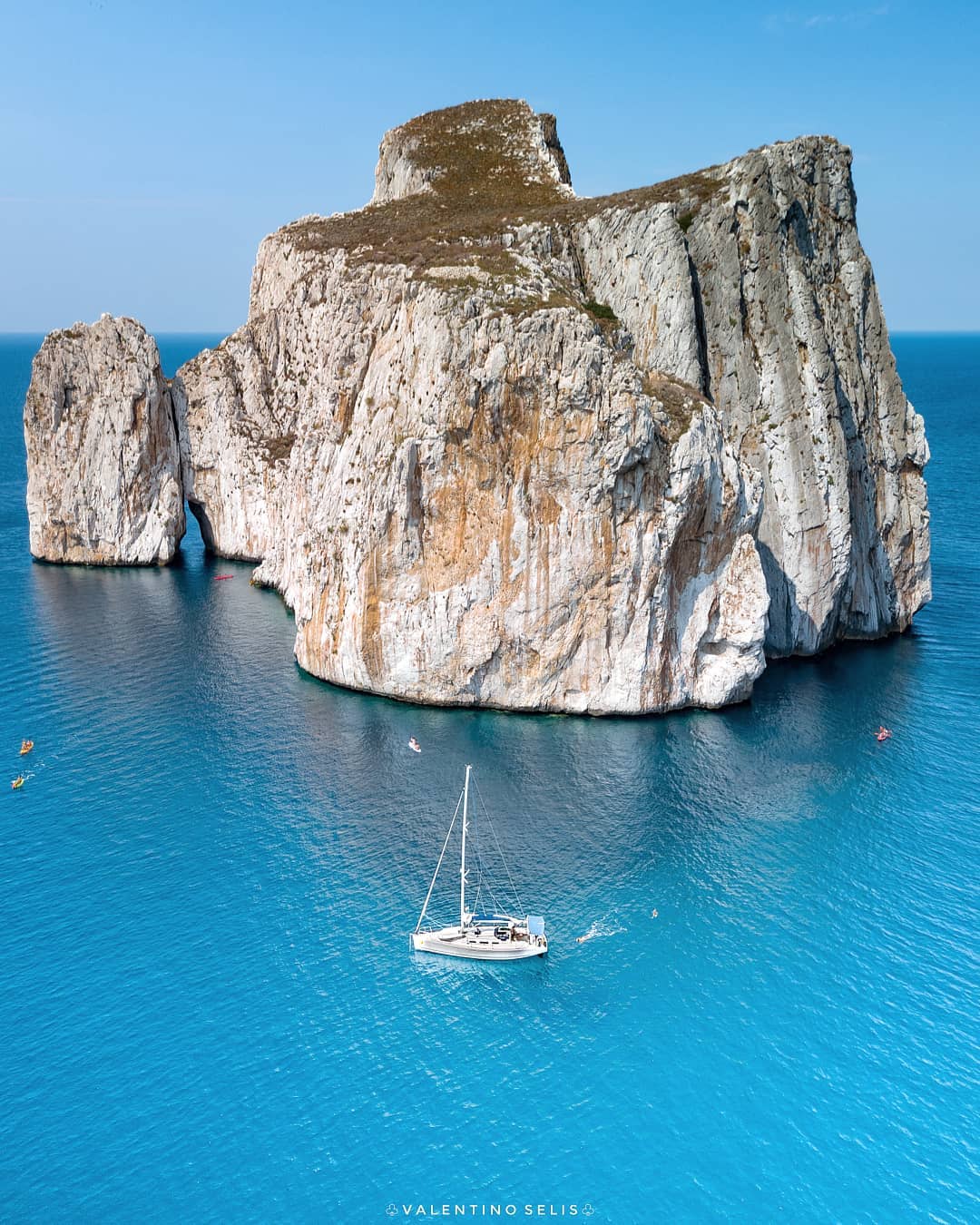 This particular plant of Olea Europaea var. Sylvestris has certainly found comfortable conditions to grow. Close to the river of Lake Liscia, on a downsloping hill sheltered from human intrusion, it slowly grew over a lifespan of 4.500 years into a gargantuan olive tree.

With a trunk circumference measuring 12 meters and a height of 8 meters, you will certainly feel respectful when approaching its imposing figure.

S’Ozzastru is the oldest tree in Italy. Together with St. Dygain’s Church Llangernyw Yew in Wales, it’s also the oldest in Europe. 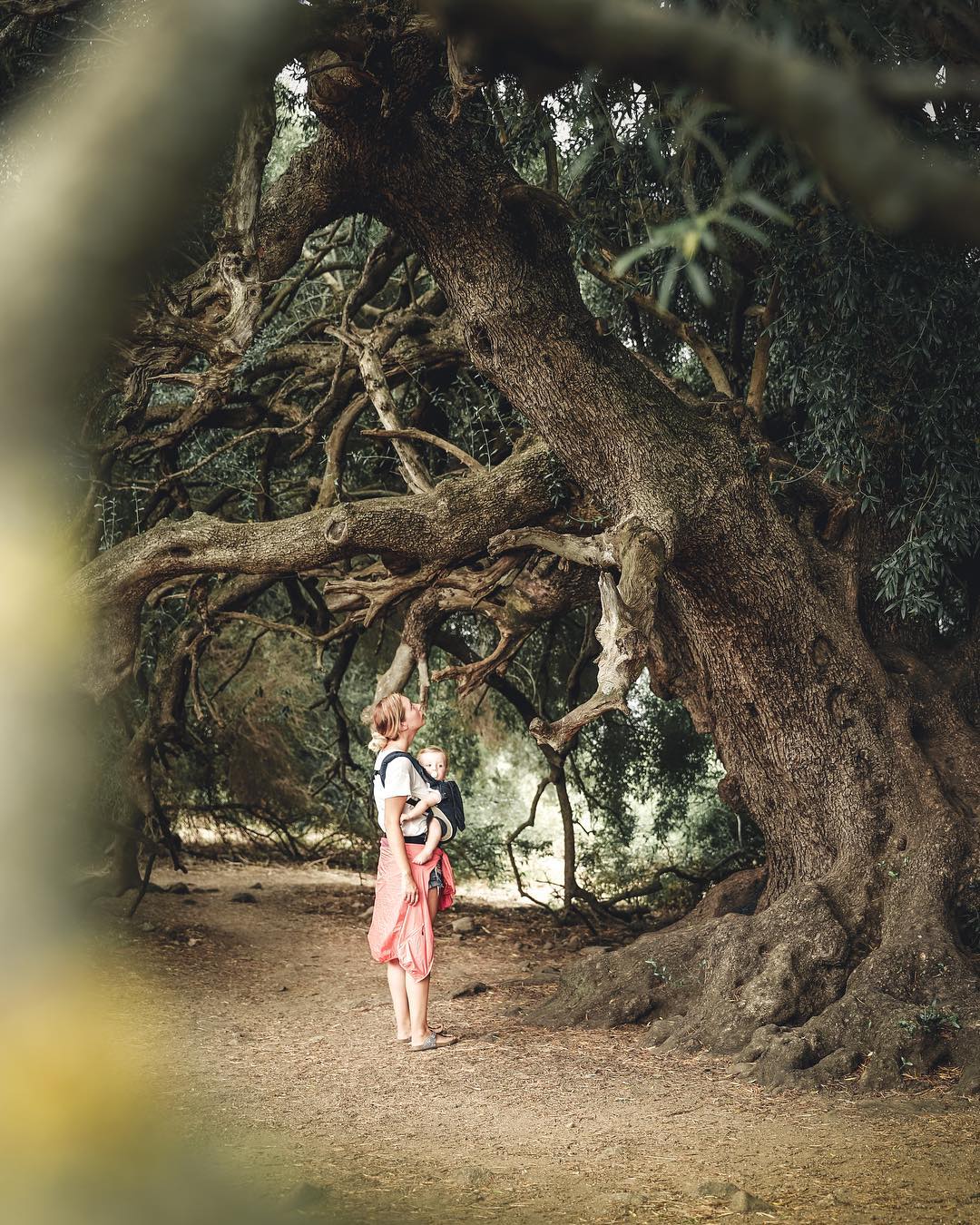 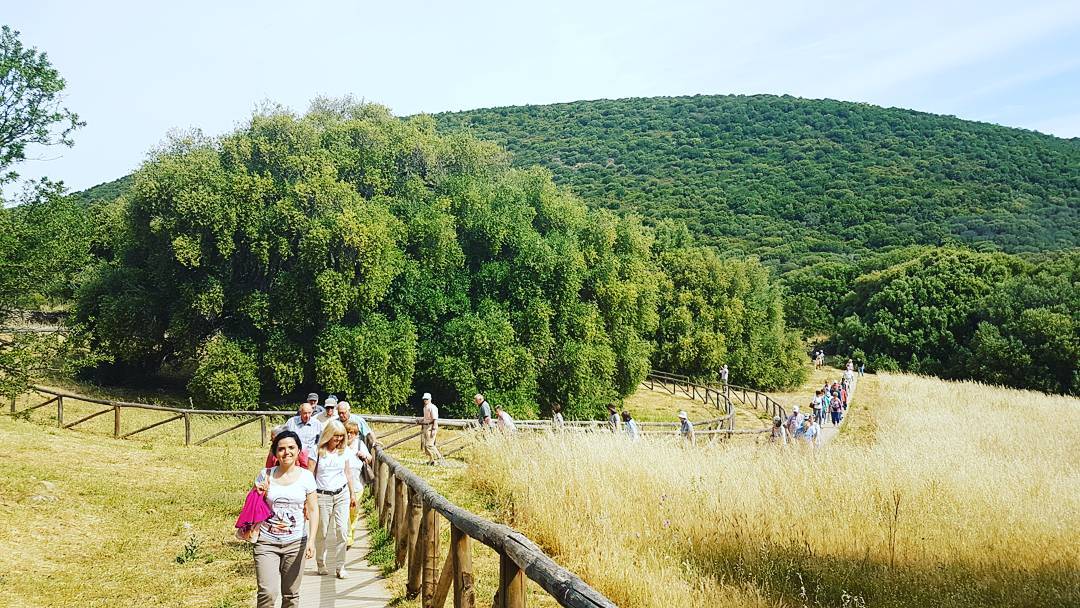 Prepare to get awed at the sight of this Natural Monument.

You can either reach Point Goloritzè by boat or by walk – it makes for a very nice trekking itinerary.

The white beach of Goloritzè is formed by the rocks and sand brought there by the small river originating uphill during millions of years of constant erosion.

From the beach, you’ll notice a huge arch of rock in the cliff – in ancient times a cave – which makes up the base of a tall isolated limestone tower reaching 143 meters high called Mount Caroddi or Northern Aguglia.

If you are asking yourself why the blue-turquoise colour of the water of the beach looks much brighter than anywhere else, well it’s due to a physical phenomenon. Many underwater streams come to the surface next to the beach and reduce the salt content of the water, thereby making it easier for the sunlight to pass through.

You’ll say it more than once after getting there – beautiful!

Can be reached by boat from Cala Gonone or Arbatax, or by land on a wonderful 120 minutes trekking path 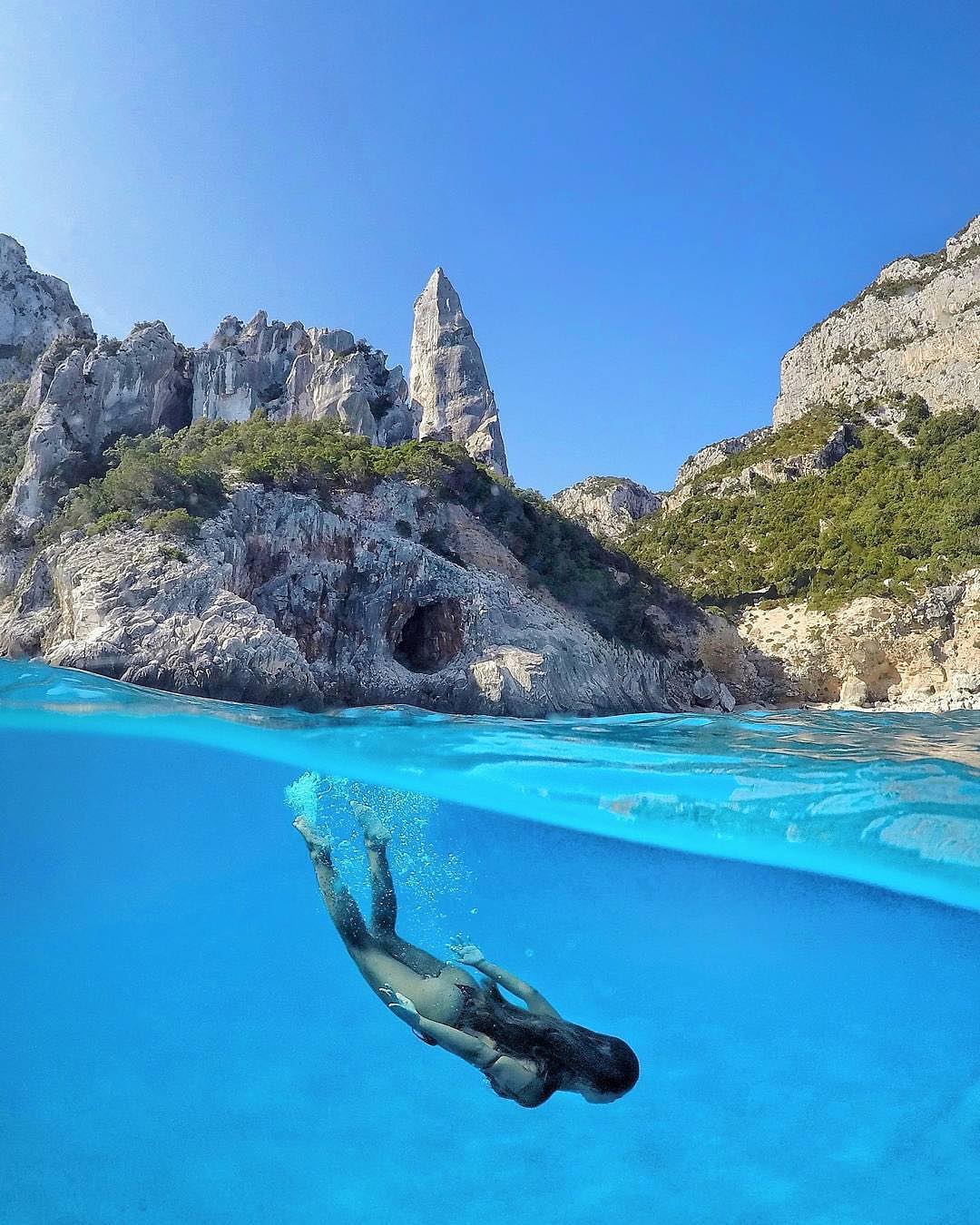 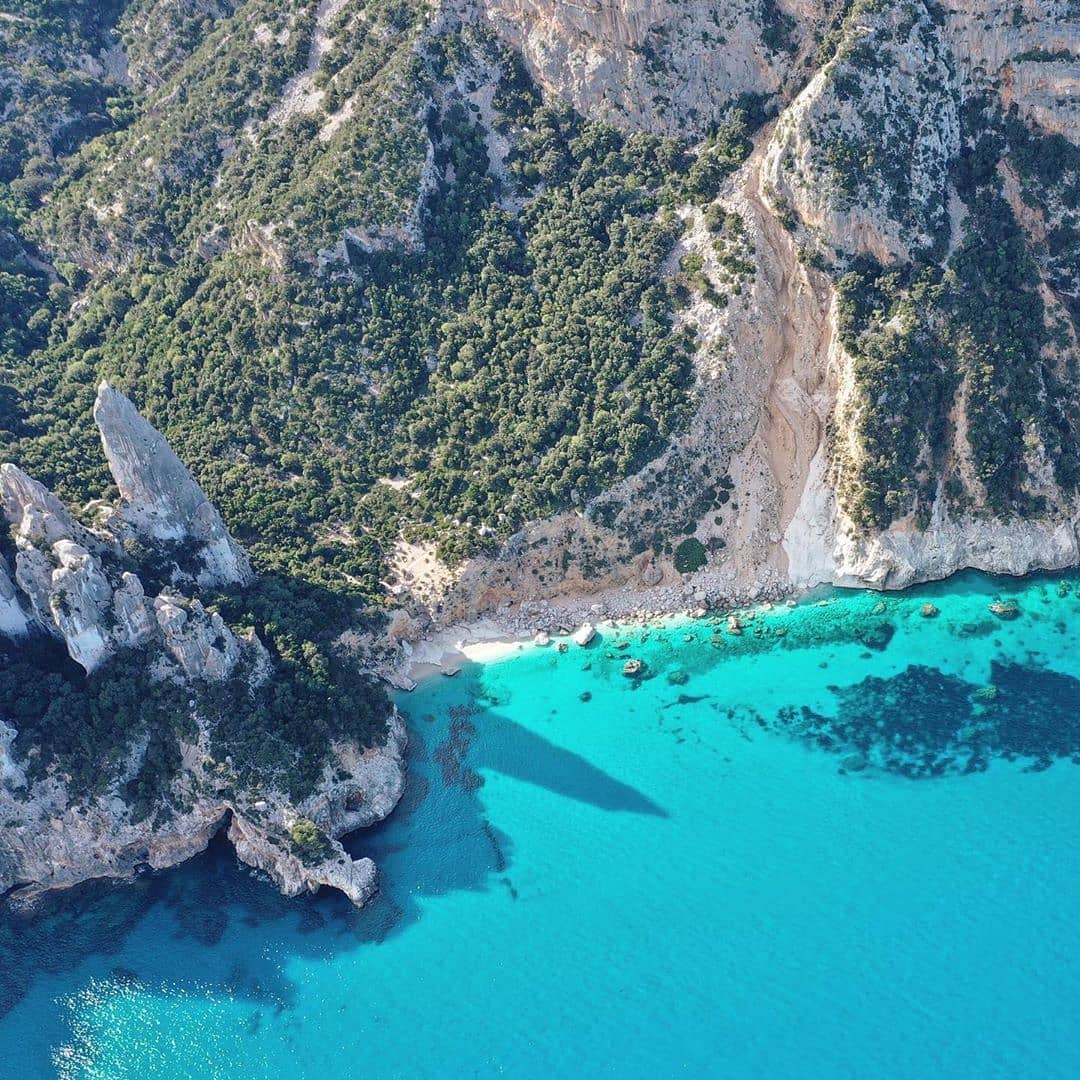 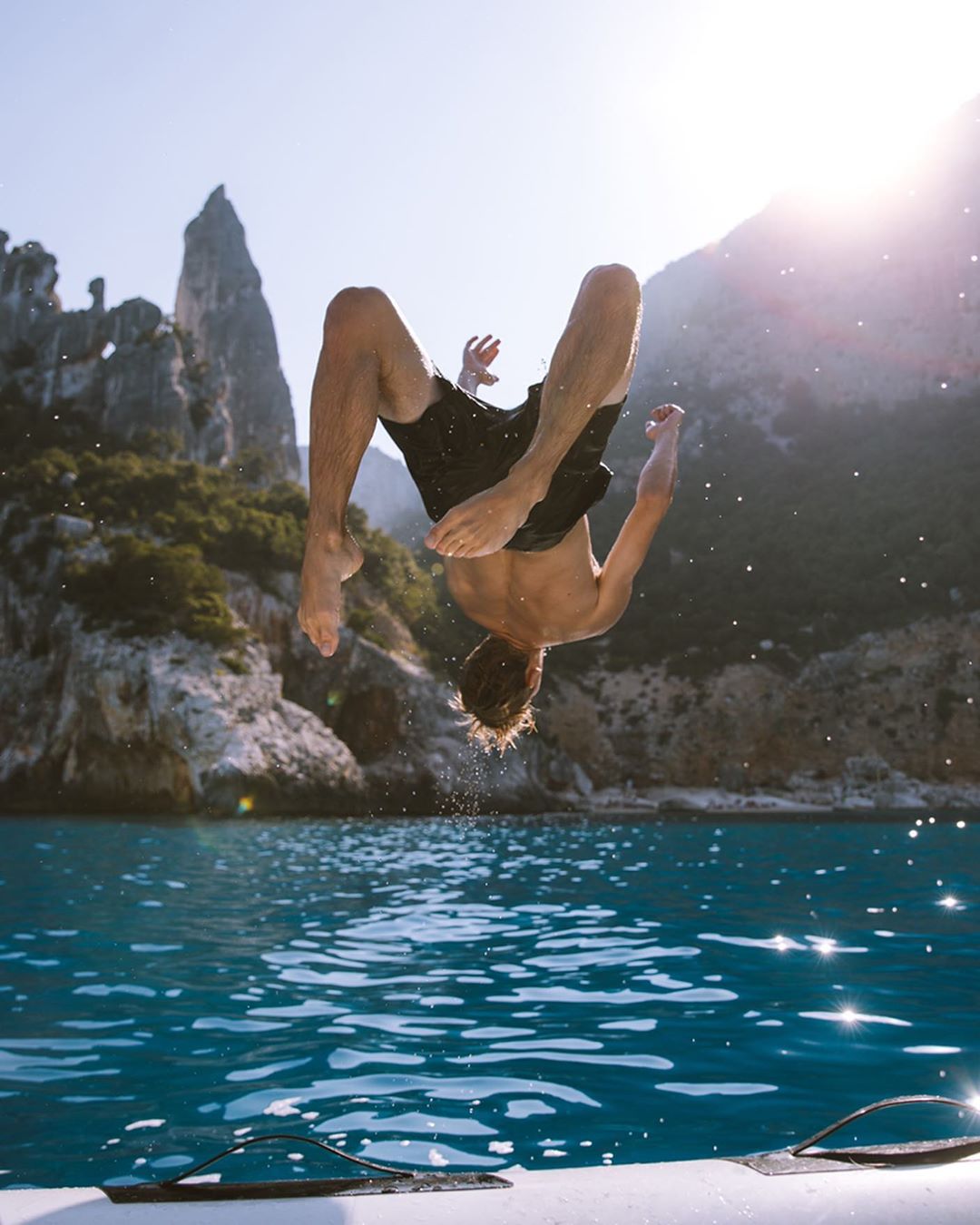 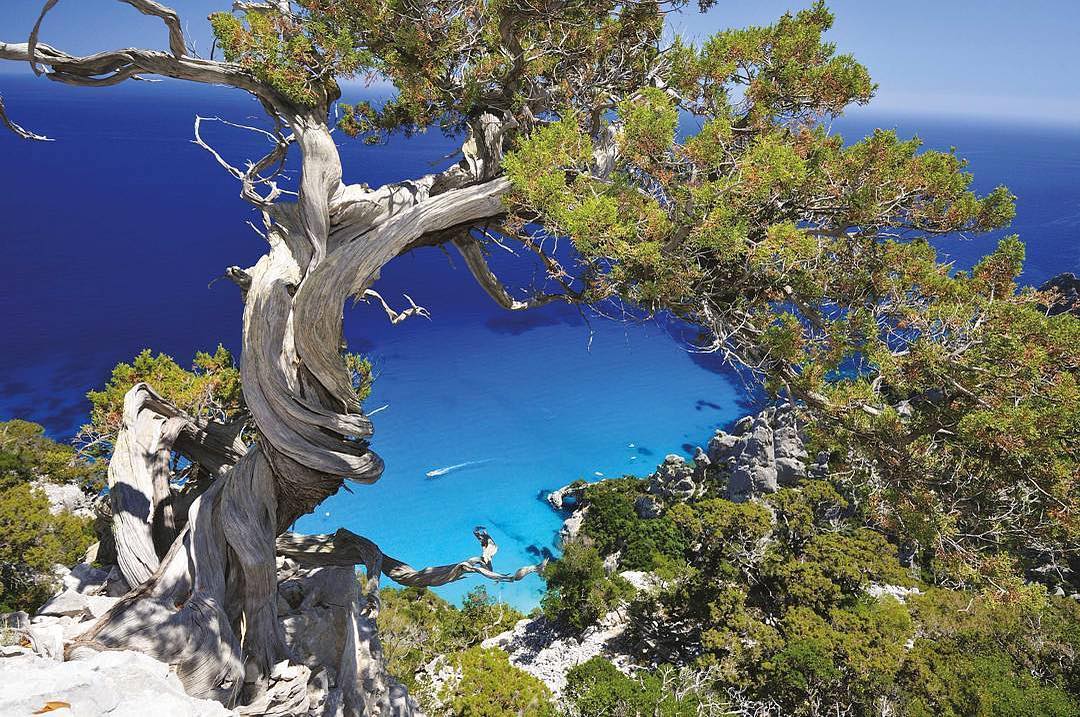 Feeling thirsty? This will help you. The spring brings to light an average of 500 litres per second of the purest and cleanest water on the island.

Since 1992 many scuba diving cave explorers have tried to reach the bottom of the spring, only recently reaching -135 meters.

Whatever the depth, the water tastes great. The setting – among high limestones and green vegetation – further enhances the uniqueness of the spring.

Once refreshed, try the short walking itineraries around the spring to explore this beautiful Sardinian countryside.

Should you be feeling tired, you can rest at the nearby hotel, where Madonna and Guy Ritchie spent a few months while shooting Swept Away (2002). The restaurant is one of the top spots in Sardinia, serving home-made dishes prepared by following ancient recipes. Have a look by clicking here

Su Gologone is strictly connected to the Cult of Water of the ancient Nuragic Civilization. In fact, it is one of the 7 most renowned spots on a journey discovering Sardinia’s Sacred Water 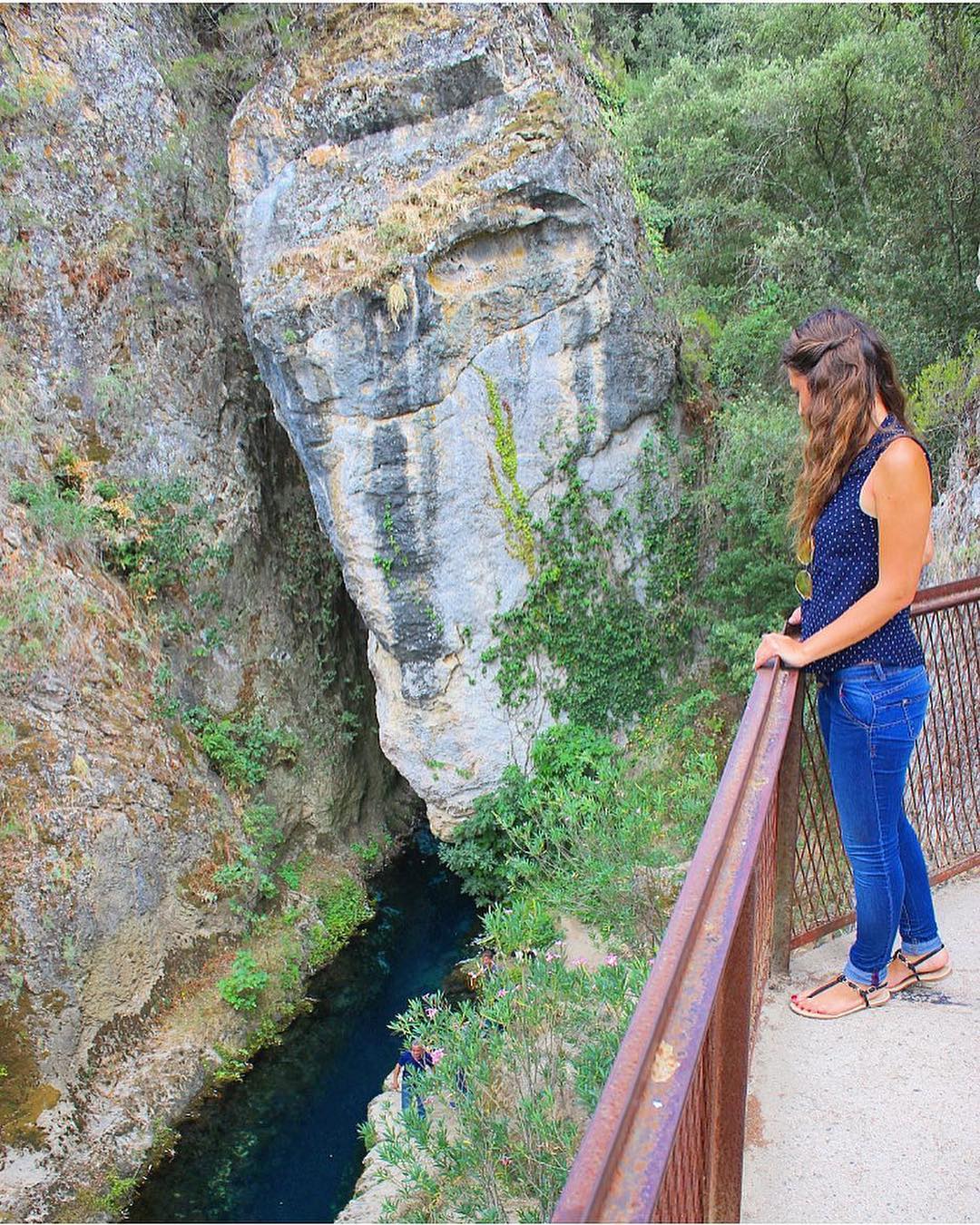 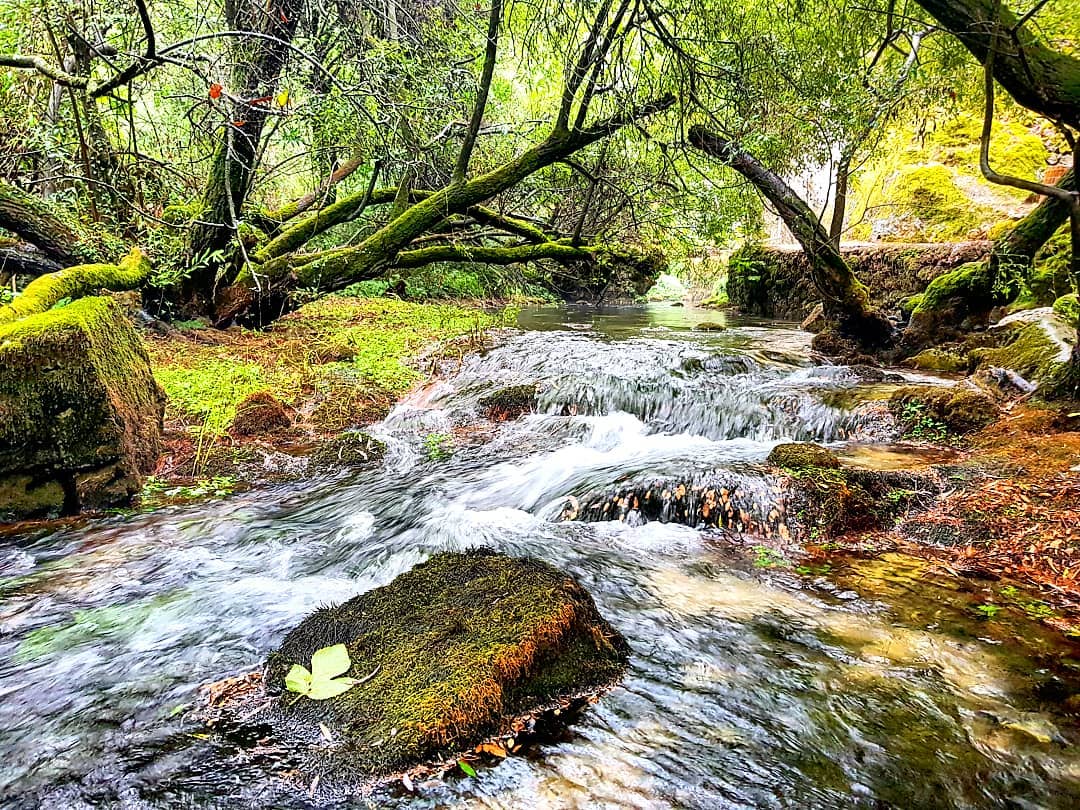 A long time ago Saint George, bishop of Barbagia and Suelli, was on his way to the small village of Osini. He felt so tired from the long road around the mountain that he prayed the rock to open up a passage.

The mountain split apart and a new way – stair in Sardinian language indicates a steep mountain road – has ever since been available to travel from the River Pardu to the River Flumineddu valley.

You too can travel on this small road – no prayers required – and climb the 50 meters high borders of the once-united limestone mountain.

The view from the top includes the small town of Osini, the ghost town of Gairo, the whole shale River Pardu valley down to the sea. 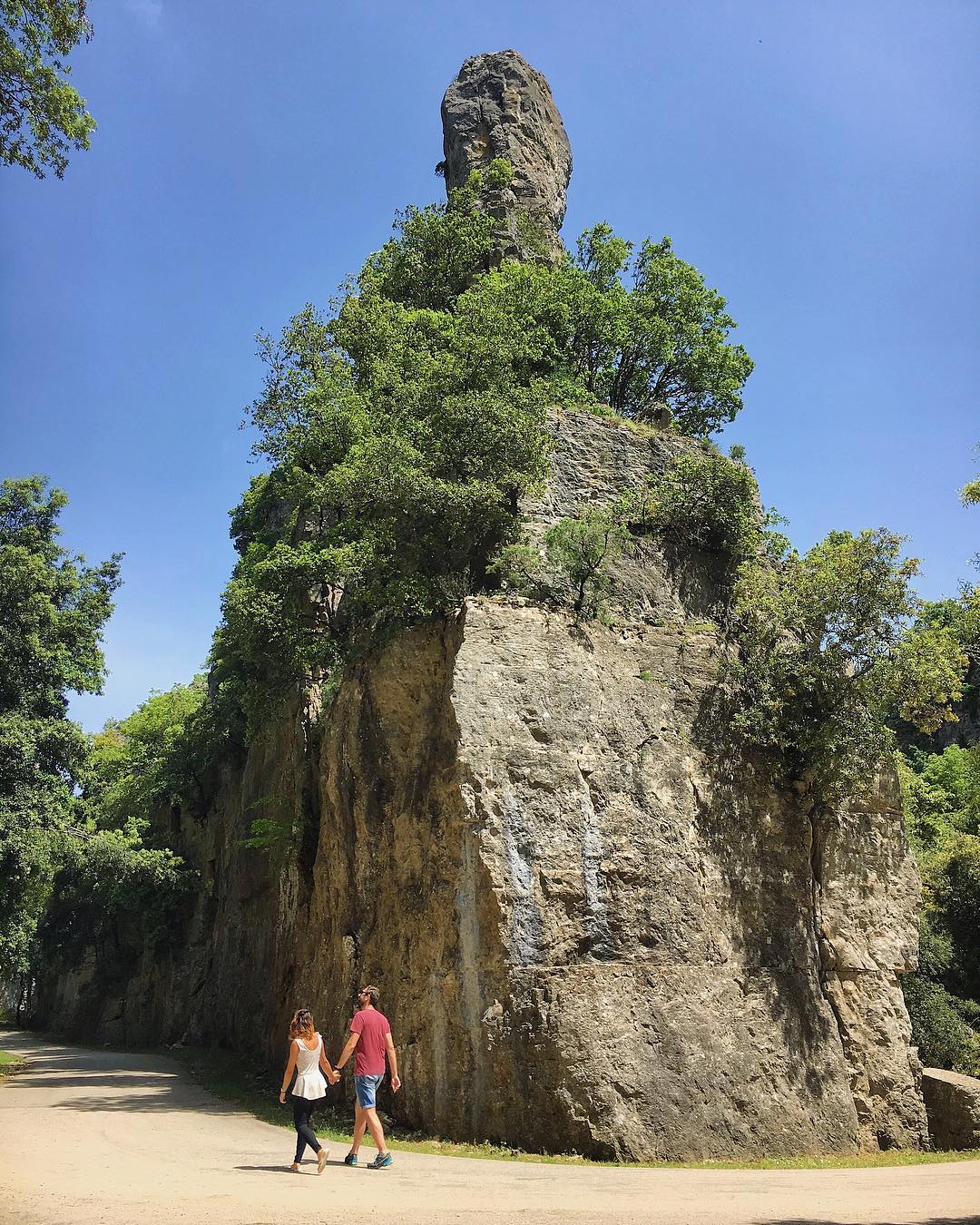 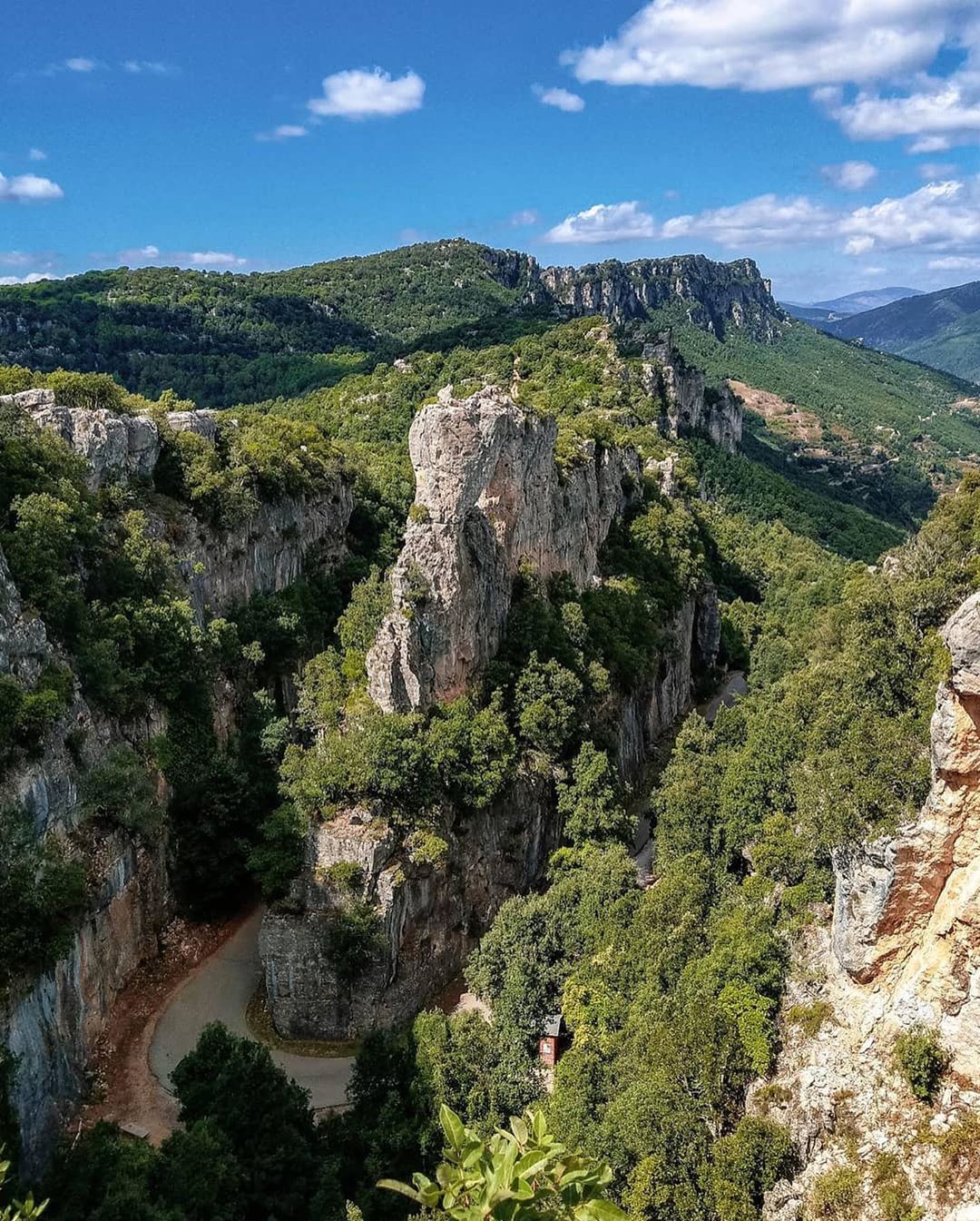 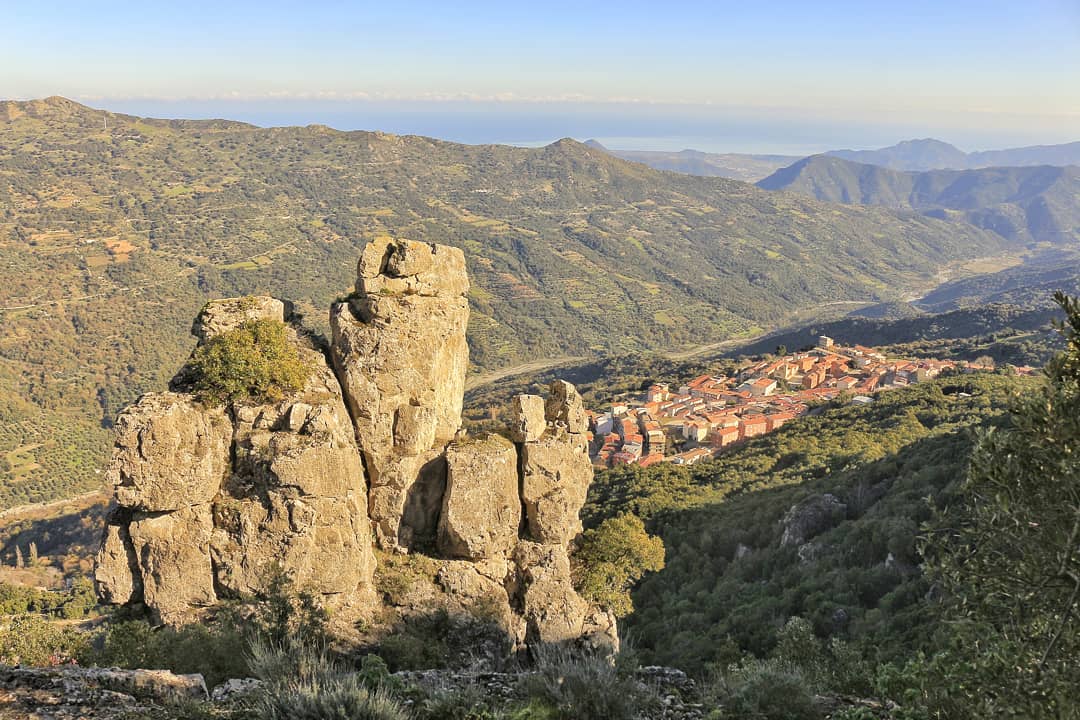 Admittedly it’s a difficult name to pronounce. It’s less difficult to reach it, provided you are willing to walk for about 1 hour over well-traced pathways through the woods of Addolì between Barbagia and Ogliastra.

The small water stream of Lungufresu made its way through the Jurassic limestone by digging a long tunnel down before falling into a small pool in front of a circular cave that amplifies the sound of the splashing water so that you’ll hear it from afar.

Rest for a moment to take it all in and you’ll feel the reverberance of the water, the humid fresh air amid a myriad of green plants, and understand why it’s such a small magical place.

Once back to where you started, check out the Grottoes of Is Janas – legend has it it’s home to three fairies. 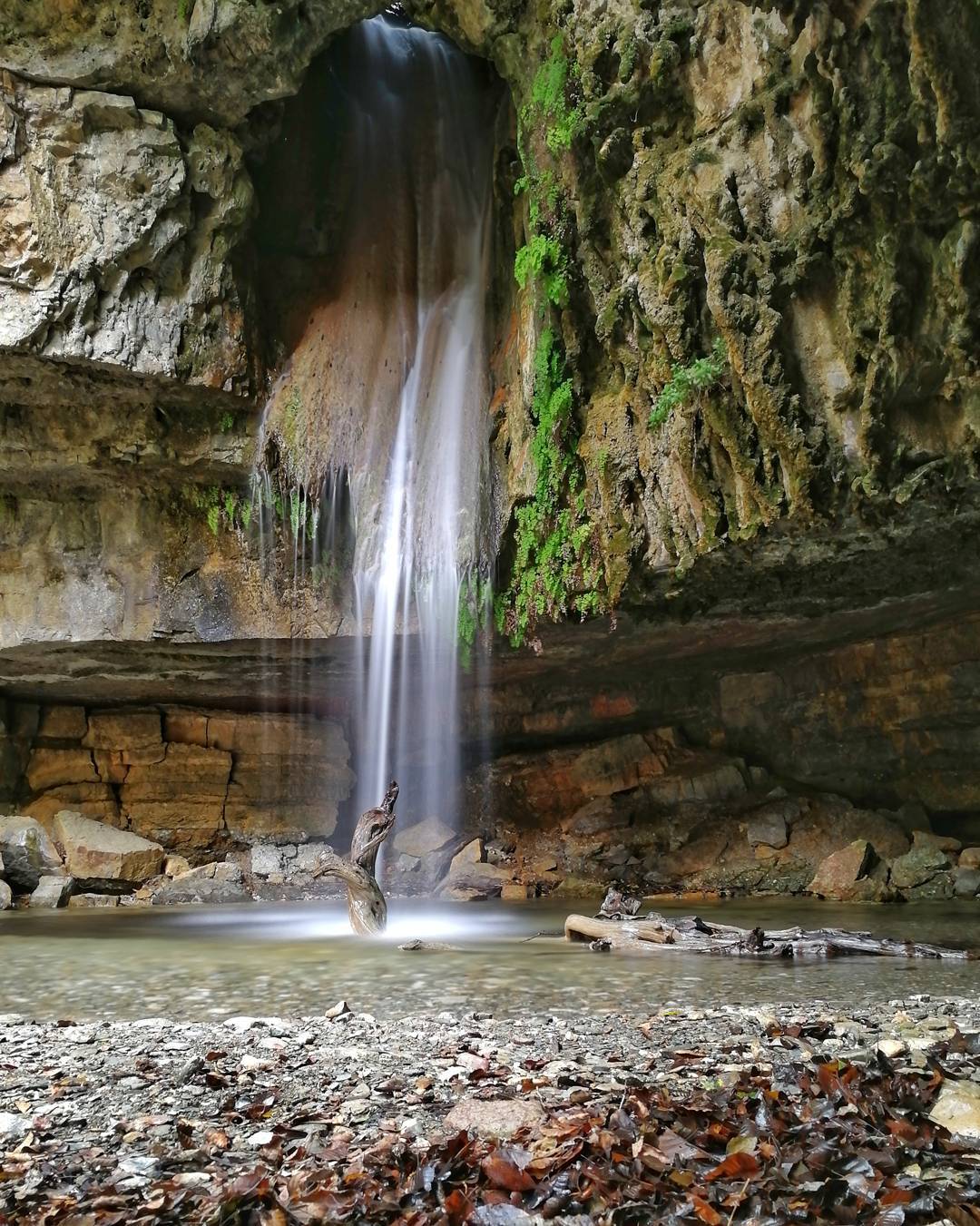 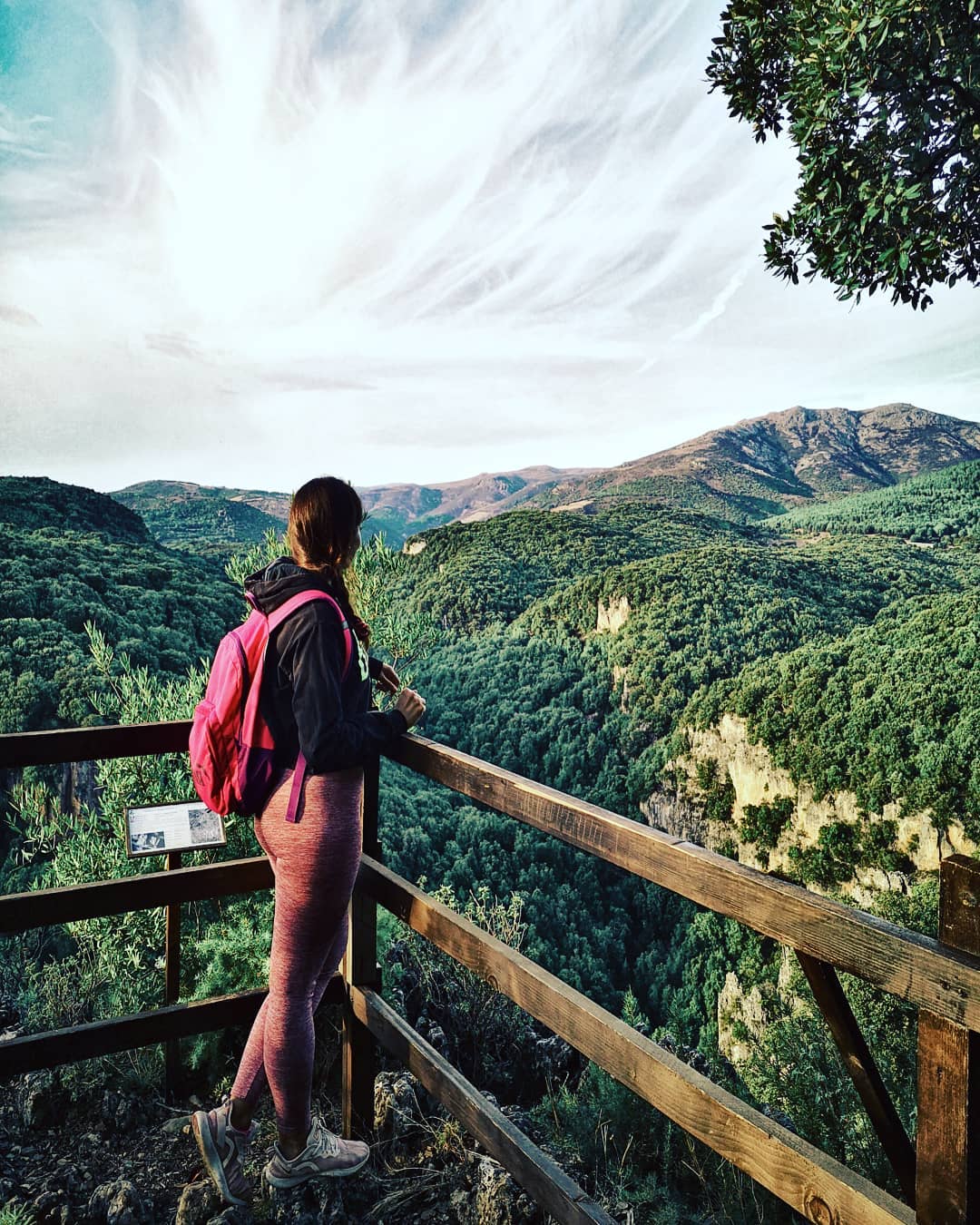 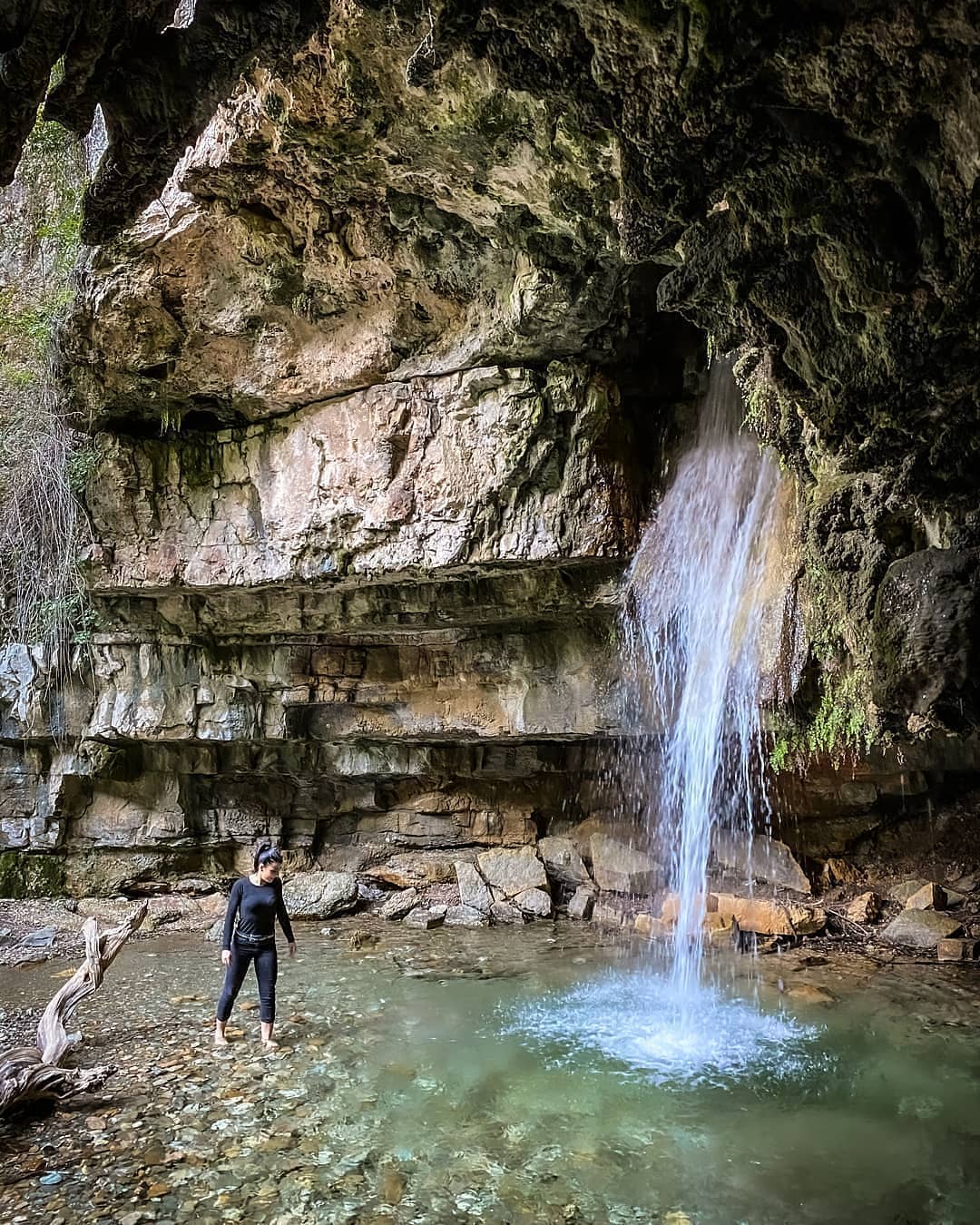 You will see for yourself that Sardinia is plenty of Natural Landmarks that far exceed the 28 on the official list. 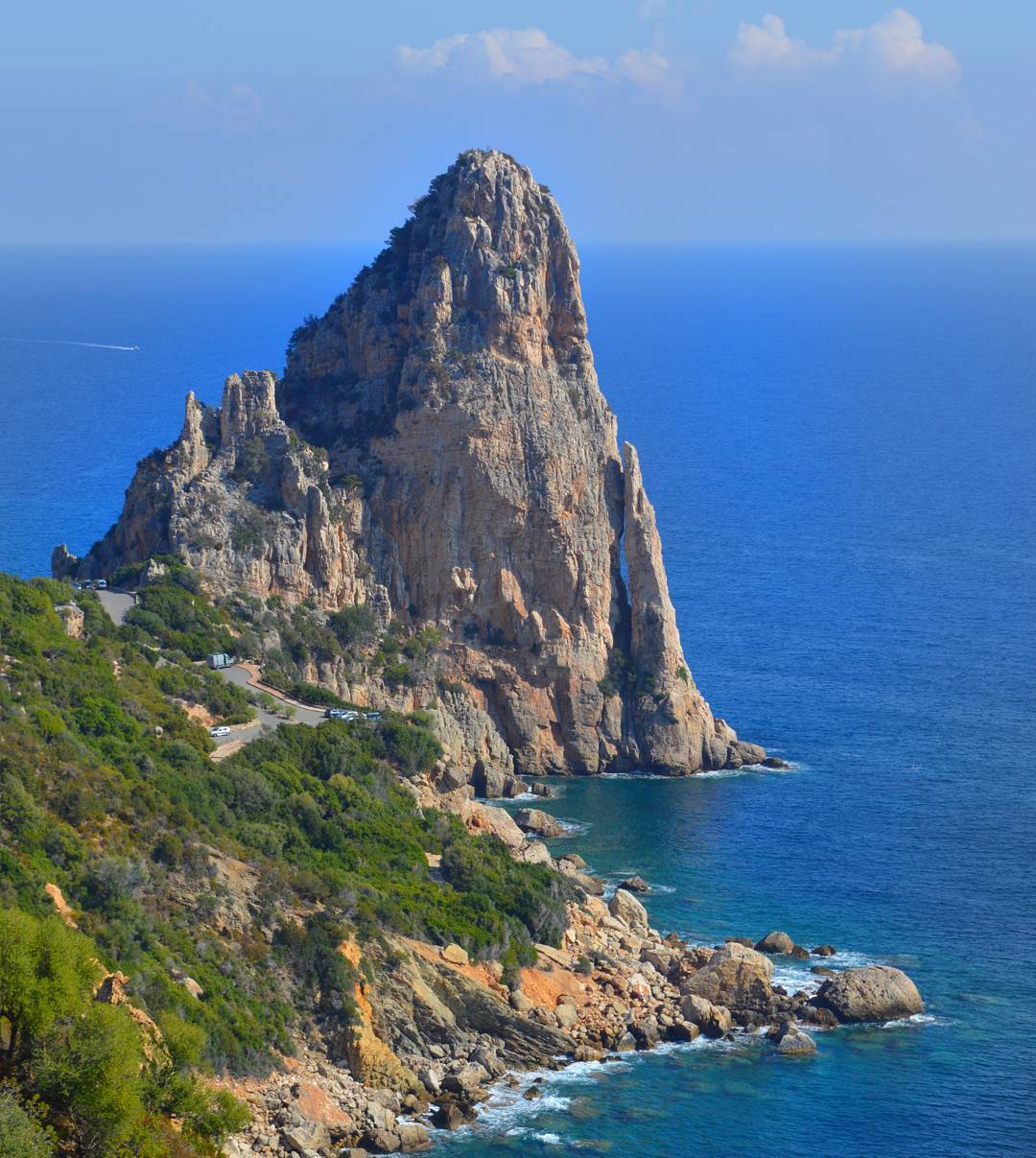